Each book will help a child appreciate and understand a person they know with special needs. 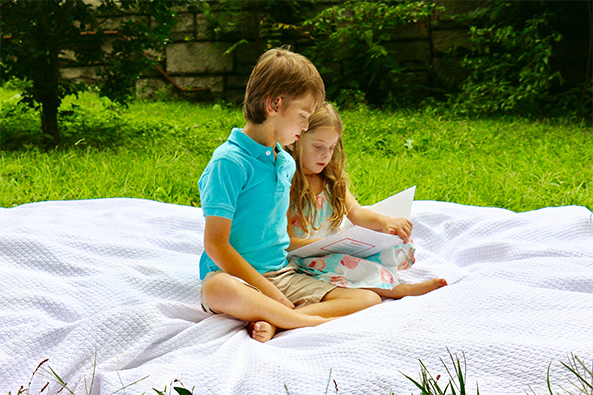 As I parent an fourteen-year-old child with special needs and a typically developing ten-year-old child, I sometimes feel like I live in two different worlds. Since my children frequently want to be together, I am constantly trying to find ways to bridge those worlds. In doing so, I’ve had to explain Brandon’s differences to my daughter and her friends. It’s hard enough explaining such differences to other adults but so much more challenging to explain to a young child. This website and book are a combination of everything I’ve learned over the past ten years from my two children, Brandon and Skylar, about bridging worlds.  I am also happy to share that now at ten years old Skylar does a better job teaching her friends about Brandon than I do, so they are comfortable around him before they even meet him and look forward to spending time with him.

My daughter, Skylar was an early talker, which was a gift to us after the trauma of parenting a son who has never talked. We always expected Skylar to ask questions about Brandon as she got older, just not at one and a half years old. I can picture it like it was yesterday. “Why doesn’t Brandon talk”? she asked. She was curious; she spoke and didn’t understand why her older brother did not speak. I gave her a very simple answer: “You were in my belly for nine months, and Brandon was in my belly for only seven months. Not everything developed for him the same way it did for you.” I finished by saying, “So his brain works a little differently than yours does.” I knew this explanation would have to evolve over the years.

I’ve always turned to children’s books to help explain things to Skylar. So the next logical step to help her understand Brandon better was to create a book about him. I included pictures of both her and Brandon in the book, and it quickly became one of Skylar's favorites.

When Skylar was three, her preschool held an event called Family Day. Parents were invited to come in and talk about their job, play an instrument, or in some way share about their lives. I decided to talk about people’s differences and being kind to each other, using Brandon as my central illustration. Brandon joined me for the visit, and I read an altered version of My Brother Brandon.

The school visit was a wonderful opportunity for our family. I had noticed that when Skylar's friends and family members were very young, they did not notice that Brandon was different from other children his age. But as they grew to about age three or four, they noticed differences and were more standoffish with Brandon. As they got to know him more and saw Skylar and other children hanging out with him, they become more comfortable. These school visits were an important part of the children’s increasing comfort with our son. Following each visit, every parent thanked me for helping their children understand Brandon and for teaching them empathy.

When Skylar was four, we visited the school again after some of her friends began calling Brandon a baby because he didn’t speak. The children’s jibes hurt my daughter’s feelings, and she asked me to come in to her school. She told me, “B is one of a kind, and I love him just the way he is.” Children are naturally curious, so I wanted to use this opportunity to educate them instead of trying to silence them. Following the visit, I again received positive feedback. Skylar even told me at the end of the school year that one of her friends didn’t think Brandon was a baby anymore. This showed me that with the right exposure, we can change the way children see people.

Although sometimes children may back away from someone that is different or even say things that seem mean, their comments usually begin innocently. Although such comments might feel hurtful, I’ve always thought it was important to use these times as teaching opportunities.

I believe acceptance of differences in others is more natural at a younger age, and I felt something had to be done on a larger scale to help children practice this acceptance. I just wasn’t sure what that something would be. I got my answer after visiting good friends whose children were six and four at the time.

My friend’s children had known Brandon a long time, and the four-year-old boy had always been friendly toward Brandon in the past. During this particular visit, however, he made several hurtful comments, backing away from Brandon and saying things like, “I don’t want to play with him.” After his mom tried several times to stop him and correct his behavior, I remembered I had the My Brother Brandon book on my phone. When I asked the children if they wanted to hear a book about Brandon, they immediately become excited; most children love hearing a book about someone they know. After listening to the story, the four-year old changed his attitude, and we engaged him and Brandon in a game of catch. By the end of the visit, everyone was playing nicely together.

A few weeks after this play-date, I started thinking about how we all know someone who has special needs—whether it be physical, mental, or emotional—and how we are not always sure of the best ways to answer young children’s questions about these needs at an age appropriate level. Then I realized that children learn a lot from picture books, so I took My Brother Brandon and used it to create a unique way for people to make a customized book about others they know with special needs.

When a child spends time with someone who has special needs or a disability at an early age, their connection with people in general who have special needs becomes more natural. These books help facilitate that kind of connection; they can be created for a son, brother, friend, or anyone you know with special needs. They can be titled, for example, My Friend Bob, My Sister Erin…. You can “write” your own custom story by creating up to two custom characters, uploading two pictures, and filling out a questionnaire then choosing from drop-down options that best describe the child you’ve chosen to write about. At the end of the process, you can order a beautiful hardcover or softcover book for yourself or as a gift for family members or friends. You even have the option of ordering a pdf version of the book, so you can have an online version on your phone at any moment when faced with a situation where a child may be staring or shying away from your child or someone you know. You can also use this pdf to print out copies if you want to read the book to your child's class.

Create characters
for your book
Upload your pictures
for your book cover and dedication page
Fill out a questionnaire
to create a story specifically about a child
This website uses cookies to improve your experience. We'll assume you're ok with this, but you can opt-out if you wish.Accept Read More
Privacy & Cookies Policy

This website uses cookies to improve your experience while you navigate through the website. Out of these cookies, the cookies that are categorized as necessary are stored on your browser as they are essential for the working of basic functionalities of the website. We also use third-party cookies that help us analyze and understand how you use this website. These cookies will be stored in your browser only with your consent. You also have the option to opt-out of these cookies. But opting out of some of these cookies may have an effect on your browsing experience.
Necessary Always Enabled
Necessary cookies are absolutely essential for the website to function properly. This category only includes cookies that ensures basic functionalities and security features of the website. These cookies do not store any personal information.
Non-necessary
Any cookies that may not be particularly necessary for the website to function and is used specifically to collect user personal data via analytics, ads, other embedded contents are termed as non-necessary cookies. It is mandatory to procure user consent prior to running these cookies on your website.
SAVE & ACCEPT
© 2023, My Heart Books